On the introductory page of the Bryan Museum Book called The Battle of San Jacinto: Texian and Mexican Accounts, the following information is provided:

On the afternoon of April 21, 1836, at 3:30 pm in the afternoon, the Texians sprang into action, catching the Mexicans by surprise. With infantry, cavalry, and the Twin Sisters cannons, the Texians bore down on the enemy with the battle cry of "Remember the Alamo! Remember Goliad!" According to Houston's official report, 630 Mexicans were killed and 730 taken prisoner. While Houston's ankle was shattered by a musket ball, only nine Texans were killed.

The inscription on the base of the San Jacinto Monument reads: "Measured by its results, San Jacinto was one of the decisive battles of the world. The freedom of Texas from Mexico won here led to annexation and to the Mexican War resulting in the acquisition by the United States of the states of Texas, New Mexico, Arizona, Nevada, California, Utah, and parts of Colorado, Wyoming, Kansas, and Oklahoma. Almost one-third of the present area of the American nation, nearly a million square miles of territory, changed sovereignty."

The book is provided for free and is made available via this link:

The Battle of San Jacinto 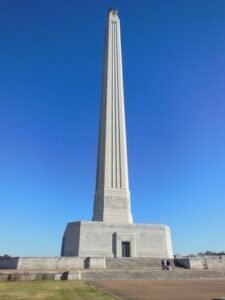 Monument to the Battle of San Jacinto